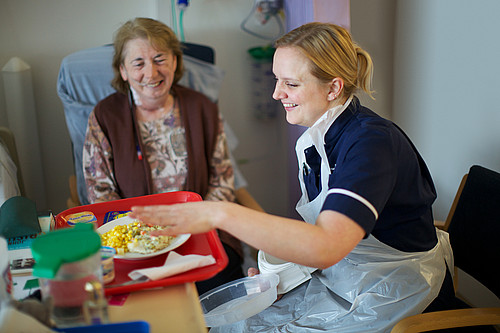 Pennine Care is a leading provider of Community and Mental health services in the North West. The Trust deals with 3 million patient appointments annually across 364 services.

In January 2015, The patient experience team, led by Kirsty Ogden, were tasked with rolling out The Friends and Family Test throughout the Trust.

The Trust began capturing patient feedback using kiosks from one supplier and text messaging from another. However, several issues were quickly realised with this approach:
• Staff and patient buy-in was low using kiosks, leading to poor response rates
• Overall response rates for the year from both channels was less than 1000!
• No improvement themes emerged from such low response rates
• With minimal reporting and analytical tools, FFT reporting took over a week, draining resources

Not only that but working with 2 suppliers was convoluted and expensive. The texting service charged a monthly platform fee on top of the initial implementation costs and the kiosks required regular maintenance and were subject to a license fee. The end results did not justify the inflated fees and low patient engagement undermined the whole purpose of FFT.

What stood out the most was the advanced reporting and analytics of the Envoy Messenger software. The ability to drill down to clinics and areas as well as the automation of reporting would save a week of staff time dedicated to creating reports!

THE BENEFITS TO THE TRUST

• The cost: The FFT package was considerably cheaper than the previous suppliers, but with much more value
• The different survey channel options: The Trust use Text, IVM, online and paper to engage every patient in service improvements
• Support team: The quick response time and ‘nothing is too much trouble’
• Envoy Messenger software: The analytics do all the hard work for the team and ‘make reporting a breeze’. What once took a week in reporting, now takes minutes!
• The free text comments analytics: Sentiment analysis, Comment reports and Keyword theming make it quick and easy to pick up on feedback themes
• Responses are automatically captured, freeing up staff time in collection and reporting
• Account managers regularly engage with the Trust in future product development

Advances in IVM technology means patients can leave a 2-minute voice message on care received. This has become such a powerful tool in training, Trust tenders and board meetings. One such recording of a 5 old year boy talking about his care stopped staff in their tracks; evoking goose bumps to hear the difference a team member can have on patient experience. The impact on staff morale to hear these snippets is invaluable.

• In a year and a half, FFT responses have increased from 1,000 to 53,670!
• Better use of staff time; reporting now done at the click of a button.
• Analytical tools instantly make sense of immense amounts of free text comments and led to several improvements to Trust services

‘YOU SAID, WE DID’ IMPROVEMENTS

• An Inpatient feedback theme flagged was poor food quality. This led to a supplier review and the quality has greatly improved. Negative feedback is now minimal.
• In an OP waiting area, the seating was changed to what the clinic thought was a better set up. Instead, a stream of feedback reported that patients felt anxious with the new design, to the point that they no longer wanted to attend sessions. Changing it back to the previous layout was a quick win to FFT, but more importantly, it had such a massive impact on patients wellbeing.
• Inpatients feedback flagged several issues with one particular ward. Off the back of this, the team organised a focus group with Healthwatch, Commissioners, and patients. All problems have now been rectified, preventing the potential of a serious safety issue.